The diagram above shows the minimum distance for an object to be seen by half the planet simultaneously.
Any farther, then like the sun, half the planet would see the object, and its distance could
not be calculated using rise/set observations.
* example – this is what is said to be the distance to the moon

But the moon cannot be observed simultaneously over 180˚. For example, when it is visible near the Arctic Circle (75˚ N. Lat), it is not seen in the Antarctic (75˚ S. Lat) and vice versa.
* example – this is to the moons visibility not related to earth/sun motion

This is similar to its observation from 51˚ N. Latitude. It can be above the horizon for as little as 8 hours for 2-3 days every orbit. At the same dates, it is visible for over 12 hours at 51˚ S. Latitude. This then reverses. When it is seen for 8 hours at 51˚ S. Latitude, it is visible for over 12 hours at 51˚ N. Latitude.
This variance is caused not only by its distance but also by the fact that its orbital path lies at an angle to earth’s equator. So each cycle it spends half the time below the equator and the other half above the equator.
Using the 8 hours as degrees (120˚) we use the rise/set times sightings as tangents that produce a distance about 1679.85 miles from earth.
This is my method –
A tangent on a circle can be defined as the line of sight for an object on the horizon.
So the rising and setting, as in this case the moon, can be described as two tangents.
Similar to stellar parallax, where the two lines converge, would give the distance to the moon.
(the data used has been sourced from https://www.timeanddate.com/moon and Collins Concise Encyclopedia of Astronomy)
The moon takes 27.32 days to complete one (sidereal) “orbit” round earth. That means it covers 360º in that time.
This would give a mean rate of 13º per day (360º ÷ 27.32 = 13º.17). But, since its rise/set times alter daily and are vastly different in the northern and southern hemisphere, it does not cover 13º per day.
The moon’s orbital plane is inclined 1º.5 to earth’s equatorial plane. This means that in each cycle the sub-lunar point is above the equator for part of the orbit and below it for the rest of the cycle.
Every month for 2-3 days it rises and sets within 8 1/2 hours at 51º north latitude (Greenwich, England). On those same dates, it is visible for over 12 hours at 51º south latitude (Stanley, Falkland Islands).
This then reverses – where it is visible for under 8 1/2 hours at 51º south latitude, it is then visible for over 12 hours 51º north latitude.
*Note that the radius of earth’s circumference is much shorter at 51º n/s latitude than at the equator.
I have calculated the radius based on the following formula;
Earth’s equatorial radius = 3963 miles
Polar radius = 3950 miles
There are 90º between the equator and each pole (N/S)
3950 ÷ 90 = 43.88 miles per degree
This is how much shorter each radius is than the equator, multiplied by the number of degrees above/below.
So at 51º n/s latitude, the length is found by 51 x 43.88 = 2238.33 minus 3963 miles (equator) = 1724.67 miles.
One day is 24.25 hours or 1455 minutes. This is also equivalent to 360º.
So, 4 minutes = 1 degree
Therefore the rise/set time lapse could be converted to degrees.
When the moon is above the horizon for 8 hours it has also been visible for 120º of earth’s circumference.
*The following diagram shows how I have calculated the distance to the moon. 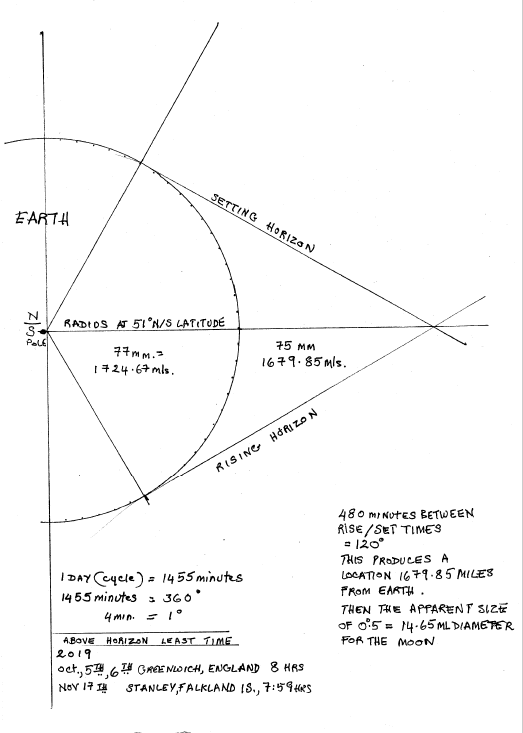 One thought on “The moons distance revisited”